As the minutes separated us from the official start of the Annual meeting of the European Federation of Journalists, the news broke that Maria Ressa and Dmitri A. Muratov are this year’s Nobel Peace Prize winners.

At a time when journalists and media workers are being persecuted, killed, littered with lawsuits, not allowed to work, breathe… the news that the Nobel Peace Prize was won for the first time by journalists fighting for freedom of speech obliged the EFJ Assembly participants to give concrete suggestions on how to fight for free journalism and the safety of journalists.

In their welcome speeches, the leaders of EFJ, TUCJ and CJA pointed out that journalists, as well as professional and honest journalism, face challenges every day – from SLAPP lawsuits, dismissals and lack of work due to the COVID-19 pandemic, reduction of workers’ rights, authors rights, to the daily struggle of journalists in Afganistan for their bare life, persecution in Belarus, Turkey, and attacks on journalists across Europe. 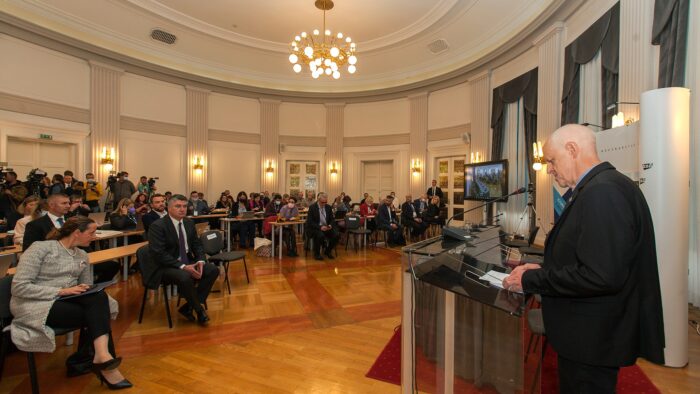 It is not in the habit of journalists to cry upon their sad fate, so the speech of the President of the Belarusian Association of Journalists Andrei Bastunets, which was even abolished by a court decision, was accompanied by loud applause that broke out in the Great Hall of the Journalists’ House and a promise that EFJ members will warn about dire situation in Belarus through their work, but also by putting pressure on their governments to do their utmost to give Belarusian journalists the right to freedom of speech and reporting without fear of ending up in prison.

The situation in the Balkans is only slightly better, it was pointed out at the round table on the pressure on journalists in the Balkans. From Slovenia through Croatia, BiH, Serbia, Northern Macedonia, Kosovo, Albania, Montenegro, journalists face threats, attacks, SLAPP lawsuits. The joint struggle continues on this issue by demanding that governments work harder on the safety of journalists because without their work there is no real democracy. 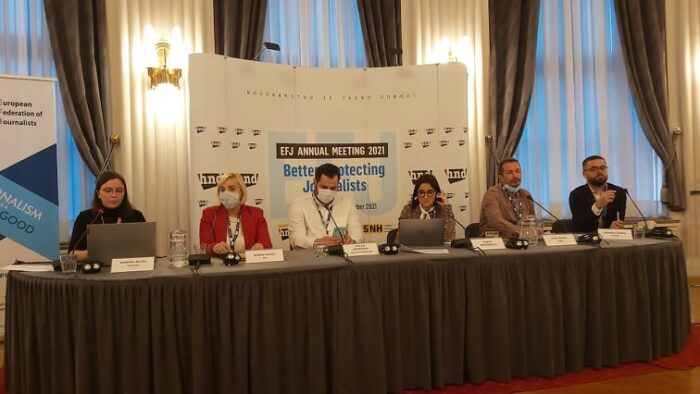 The rest of the day EFJ delegates spent discussing and approving the report on the work of the European Federation of Journalists.

The second day of the assembly began with the presentation of the results of the project “Illiberal turn” on journalism and the news public in times of polarization. It is a comparative study on news consumption and political polarization in four countries – the Czech Republic, Hungary, Poland and Serbia. In addition to the analysis, the project also generated recommendations for journalists and policy makers on how to restore public confidence in the media and journalism. Read the whole project HERE.

Let’s move on – together, in solidarity and strongly

At the very end of the assembly, motions and statements were adopted that covered most of the problems that journalism faces today, and at the same time obliged the EFJ and all the members to continue working to protect free journalism and journalists.

In the Croatian context, it was concluded that the EFJ would ask the Croatian authorities to amend the Criminal Code to decriminalize the provisions on breach of honor and reputation in order to reduce pressure on the media and journalists. This is an amendment proposed by the Croatian Journalists’ Association in the conclusion on SLAPP lawsuits.

CJA reminds that a large number of SLAPP lawsuits is a serious problem and the figures of 924 active lawsuits against journalists and media in the requested amount of 10.5 million euros cause concern.

This is exactly what the leaders of the EFJ, TUCJ and CJA discussed at a meeting with Prime Minister Andrej Plenković after the assembly.

As a statement of the Assembly, the proposal was accepted on behalf of the Trade Union of Croatian Journalists and the Independent Association of Journalists of Serbia, BH Journalists and the Slovenian Journalists’ Association by TUCJ President Maja Sever, emphasizing the common problem of local media. She suggested finding a transparent model for their funding given that the current one is unsustainable because local authorities fund the media through advertising and thus become interdependent in a closed circle.

Regarding Belarus, the conclusion is to call on the European Commission and the European Parliament to impose sanctions on the regime in Belarus so that BAJ can continue its mission, and it was pointed out that the members of the association will be helped and allowed to continue their work.

A number of other conclusions and statements were made, including a proposal for the urgent establishment of an international commission to investigate the killings and abductions of journalists in Kosovo from 1998 to 2005, proposed by representatives of the Independent Journalists’ Association of Serbia (NUNS). Then a motion about freedom of the press in France because, as Dominique Pradalié of the French Journalists’ Union said, the new law prevents direct access to people such as firefighters and police with whom journalists can no longer communicate directly, but must do so through a third party in charge.

It was also concluded that it is necessary to help journalists in Afghanistan, who are especially targeted by the Taliban, and especially female journalists. A terrible example is the murder of Fahim Dashty, a journalist and representative of the Afghan National Journalists’ Union.

It was also decided, at the suggestion of the Turkish Association, that they would react to the proposal of the new Law on Disinformation, which they consider to be pressure from the authorities on journalists, abuse of the law and censorship. Support was also given to Slovenian colleagues in their efforts to finance and protect the independence of the Slovenian News Agency (STA) and to reduce pressure on journalists, which is growing stronger and comes from right-wing Prime Minister Janez Jansa. Members of the Assembly also advocated for quality and humane reporting on refugees.

In his closing remarks at the end of the Assembly, EFJ President Mogens Blicher Bjerregård said that with the numerous conclusions and statements adopted there is a lot of work for EFJ Steering Committee to be done as the new EFJ General Assembly is being held in eight months. 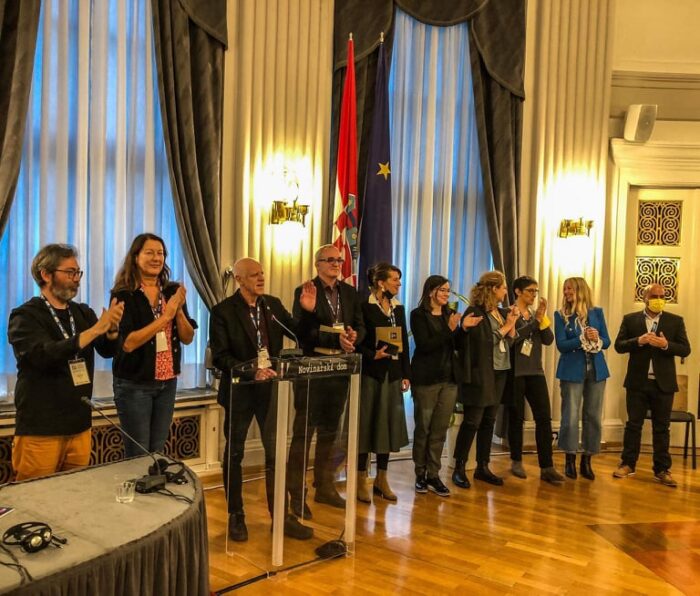 He pointed out that the discussions were fruitful and how great it was to meet again in person. Bjerregård thanked all the participants, especially the hosts, who, as he said, were excellent organizers and enabled the flawless and successful work of the assembly “because without the people who organize and work on it, it would be much harder.”

The Trade Union of Croatian Journalists is proud of the engagement of its members and the cooperation with the CJA in the organization of this event, which is an incentive for everyone to work harder in protecting journalism!